Africa, still now, is a very mysterious continent to us. It is considered the birthplace of every species living on Earth, and it continues to astonish us with new organisms that we haven’t encountered before. From its mysteries also comes very much unknown and potentially dangerous microorganisms which can cause havoc and ruin our well-running society. Such a mystery germ is the Ebola virus. It appeared out of nowhere in the 1970s and disappeared suddenly for more than a decade, caused few outbreaks in the mid-1990s’ and ultimately the major epidemic in 2014 which killed 10,000s of people. Even after the 2014 epidemic died out suddenly, cases still lingered for years. In this article, I will dive into the world of Ebola itself, how it acts as an intelligent species, and cause us the most horrible pains and sufferings along with the infection. Until 2013, most EVD outbreaks originated from Middle Africa; From late 2013 to early 2016, EBOV caused the largest outbreak, which got spread from Guinea to other major countries around the world. The family of the index patient acquired the viruses from eating bushmeat, a common food eaten by the natives of Africa.  To date, five species of Ebola viruses been identified named Zaire Virus (EBOV), Sudan Virus, Bundibugyo Virus, Tai Forest Virus and Reston Virus. All the four viruses, except the Reston Virus, have been registered to infect and spread among humans while Reston Virus mostly spread among pigs. The Zaire Virus and Sudan Virus is accounted for most of the infections and outbreaks that we witnessed in the past.  Check out my first article on Ebola…. here Epidemiology

Since the discovery of EBOV in 1976, at least 17 EVD outbreaks have originated and as of January 2020, ~33, 604 infections have occurred in humans and took 14,742 lives, CFR (Case Fatality Rate) standing to 43.8%. Previous outbreaks have opened a scope for researchers to examine human to human transmission of Ebola Viruses. The hospital spreads have been severely documented and Ebola Treatments Unit was established which gave scientists better opportunities to understand the virus which was previously known as an exceptional agent as a bioweapon.  It has been found, after several studies, that the virus is most likely to be transmitted by direct human to human contact, bodily fluids and potential fomites while it is suspected it may be transferred via aerosols too. It’s the biggest headache for the epidemiologists. In some cases, it was observed that touch alone caused the transmission. Ebola has even been found in saliva, breast milk, urine and semen from the patients that have been infected by it. Moreover, viral RNA has been recovered from “stool, tears and sweat and in rectal, vaginal and skin swabs” but it doesn’t necessarily infect people. The virus can stay inside the recovered person’s body for 82 recorded days in semen samples and the highest period of transmission events ever registered was 482 days after EVD onset. So, it is generally advised to not have intercourse or to be cautious with any kind of fluid transmissions and disposal for at least a year. An intramuscular infection study conducted in Non-Human Primates (NHP) (e.g. Chimpanzees) where they were injected with a calculated dose of the virus resulted in the deadly disease among all the animals. This concluded that very few amounts of virus (virions) may be required to infect a human with a lethal version of the disease, although the actual dose couldn’t be determined from the above experiment. It is found that the filovirus can survive on solid surfaces and liquid for several days to several weeks. Although, aerosols transmission (transmission through the air) is not been backed by many studies, but samples collected during environment sampling of the ward where the infected people were kept, while cleaning showed multiple positive results by RT-PCR. 16 masks worn by health workers showed positive results even though those masks were looking spotless and weren’t bloody or soiled. Though many doubts that those masks were cross-contaminated but other speculations suggest the presence of aerosol spreading of the virus. 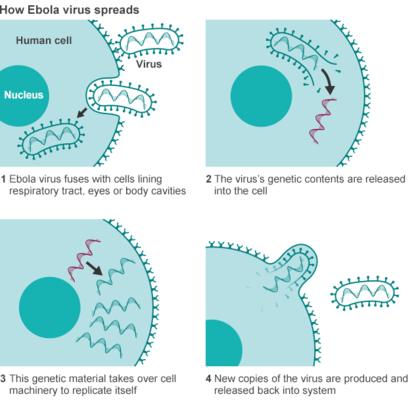 The analyses of the~1600 near-complete EBOV genome sequences that were obtained from the 2013 outbreak revealed several genomic mutations within the virus. In an artificial laboratory environment, mutation led to the enhancement of virus invasion by lowering the activation barrier that is required for the fusion of EBOV particle membranes with host cell membranes.  Because of limited data, the easy understanding of the interaction of the host filovirus is very challenging. The samples that were acquired in the 2013-2016 outbreak are still being analyzed by using a systemic approach in understanding the host’s consequences on the human body. The EBOV has the capability to infect most of the human cells, but it mainly targets a few specific cells in livers and dendritic cells. As those primary target cells get infected, they migrate towards regional lymph nodes and to the whole of the liver and spleen and start propagating themselves in numbers by utilizing all the resources from the host. Dendritic cells reacts to EBOV infection by suppressing major MHC class II responses which play an important role in initiating immune responses, increases the production of chemokine, which can primarily function as the migratory guide for the guarding leukocytes (an immunity cells) in our system but it also is a major inflammatory element and suppresses pro-inflammatory cytokines which cause the death of many lymphocyte cells. Such a high amount of lymphocyte depletion leads to severe hypotension, loses the ability of blood clotting which results in fluid loss and multiple organ dysfunction syndromes.

A considerable amount of progress has been made in understanding the immune response to EBOV infection at the microscopic level using a lab testing environment, but the systemic immune response has not been explored properly. The virus handicaps the induction of intrinsic and innate immune responses of the host. This inhibition of the immune function allows efficient virus replication in the host's cells, thereby speeding up the spread of the virus. In recent studies, it has been concluded that EBOV has shown total immunosuppressive characteristics. Even though EBOV specific immune responses are developed but are often outpaced in the host-pathogen arms race, in which time component is very crucial.  Amid the uncontrolled and unsupervised transmission of EBOV during the 2013-2016 outbreak, the WHO urged for the immediate acceleration of the development and evaluation of the EVD candidate vaccine. It was identified that the EBOV glycoprotein GP 1,2 is the major viral immunogen, so every candidate vaccine producers that were in their advanced development stage were made to target against these proteins. Using ring vaccination strategy, where the contacts of the infected people and contacts of those contacts are vaccinated, the candidate vaccine rVSV∆G-ZEBOV-GP (comprises a live attenuated VS virus) vaccine was been administrated to 276, 520 people in the DRC as of 26 January 2020. Out of which 93, 965 vaccinated people revealed a lower attack rate among people who were vaccinated than in unvaccinated people. In a model of EBOV infection risk, introducing ring vaccination with the above vaccine resulted in a decrease of 70.4% of the geographical area of risks and 70.1% of the level of Ebola Virus infection risks. As of December 2019, the vaccine has been approved by the FDA, European Commission and has been licensed in China and Russia. There are several other vaccine drugs like Remedisivir which gained instant popularity during 2015 but it was soon discarded as less effective.

The ultimate question still lingers, “Is Ebola still a matter of concern?” Well, from the starting of my first article I had been mentioning how Ebola lives a very perplexing life. It comes out as a major wave and takes along the lives of the innocent. Ebola, like many other viruses, can mutate themselves as they propagate so rapidly, giving them short generation gaps. This gives them the advantages to produce shields against all the antiviral drugs and vaccines and eventually rendering them useless. Moreover, they might evolve regarding the mode of transmission. If Ebola gets mutated to be transmitted through air, then it will be very hard to estimate the damage it might bring to the human civilization. As of recently, an outbreak declared on Aug. 1, 2018, and as of March 30, 2020, over 3453 confirmed cases have been reported with 2,264 deaths. Since Feb. 17, 2020, no new cases have been reported until a fresh case was registered on April 11, 2020. EBOV didn’t fail to surprise us in every step and every corner, and there will be more to come.

[Note: Nothing from the image has been altered]